The development of photocatalysis has been the focus of considerable attention in recent years with photocatalysis being used in a variety of products across a broad range of research areas, including especially environmental and energy-related fields. Following on from the water splitting breakthrough reported by Fujishima and Honda in 1972, the photocatalytic properties of certain materials have been used to convert solar energy into chemical energy to oxidize or reduce materials to obtain useful materials including hydrogen and hydrocarbons, and to remove pollutants and bacteria on wall surfaces and in air and water. Of the many different photocatalysts, TiO2 has been the most widely studied and used in many applications because of its strong oxidizing abilities for the decomposition of organic pollutants, superhydrophilicity, chemical stability, long durability, nontoxicity, low cost, and transparency to visible light. The photocatalytic properties of TiO2 are derived from the formation of photogenerated charge carriers (hole and electron) which occurs upon the absorption of ultraviolet (UV) light corresponding to the band gap. The photogenerated holes in the valence band diffuse to the TiO2 surface and react with adsorbed water molecules, forming hydroxyl radicals (•OH). The photogenerated holes and the hydroxyl radicals oxidize nearby organic molecules on the TiO2 surface. Meanwhile, electrons in the conduction band typically participate in reduction processes, which are typically react with molecular oxygen in the air to produce superoxide radical anions (O2•−). In addition, TiO2 surfaces become superhydrophilic with a contact angle of less than 5◦ under UV-light irradiation. The superhydrophilicity is originated from chemical conformation changes of a surface. The majority of the holes are subsequently consumed by reacting directly with adsorbed organic species or adsorbed water, producing •OH radicals as described above. However, a small proportion of the holes is trapped at lattice oxygen sites and may react with TiO2 itself, which weakens the bonds between the lattice titanium and oxygen ions. Water molecules can then interrupt these bonds, forming new hydroxyl groups. The singly coordinated OH groups produced by UV-light irradiation are thermodynamically less stable and have high surface energy, which leads to the formation of a superhydrophilic surface. TiO2 is the most widely studied photocatalyst and it is used in numerous applications because of its compatibility with modern technology. New materials and applications involving TiO2 can improve our lives in areas such as energy production and environmental protection.

Background of establishment of PIRC

TiO2 photocatalysis is widely used in a variety of applications and products in the environmental and energy fields, including self-cleaning surfaces, air and water purification systems, sterilization, hydrogen evolution, and photoelectrochemical conversion. The development of new materials, however, is strongly required to provide enhanced performances with respect to the photocatalytic properties and to find new uses for TiO2 photocatalysis. This research institute opens facilities regarding photocatalysis and collaborates with researchers to develop photocatalysis, which starts from April, adopted by a program of Ministry of Education, Culture, Sports, Science and Technology.

Industry of photocatalysis develops to 100 billion JPY and society requests many kind of applications. This research institute creates air and water purification system using self-cleaning effect and strong oxidation ability, and clean energy such as hydrogen from artificial photosynthesis. To realize it, we promotes to construct JIS and ISO and to use facilities to evaluate photocatalytic performance. Furthermore, we support state of the art of new synthetic methodology of photocatalysts using plasma process etc. We open our facilities to public and collaborate researches with researchers to develop photocatalysis which can apply society. Our research institute is aimed for providing 1) energy saving and environment-friendliness society, 2) safety society with sense of security and 3) comfortable space. We accept some challenges for general research topics and ten challenges for specific one. 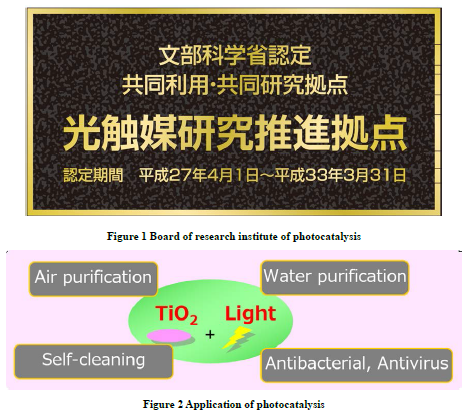 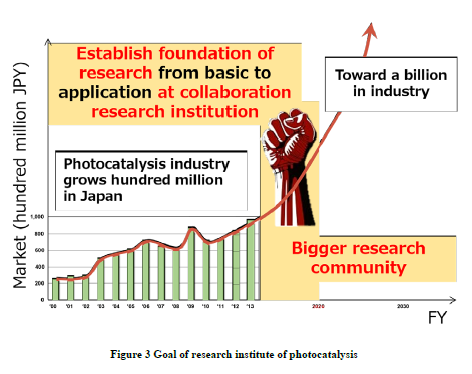 Our research institute is aimed for providing 1) energy saving and environment-friendliness society, 2) safety society with sense of security and 3) comfortable space.

We, living in 21 century, have many problems regarding global warming, depletion of resources, air and water pollution. Photocatalysis is environmental technology which has many potentials. This research institute devotes problem solving in the world by development of photocatalysis, by becoming core institution for photocatalysis and by promoting collaborate research among researchers.