To solve the global warming problem, the biggest issue for humankind in the 21st century, it is necessary to substantially shift the energy sources from fossil energy such as coal, oil and natural gas to renewable energy. With this background, the predecessor Solar Power Generation Technology Division had worked to promote research of the University on solar power generation by disseminating the research results in Japan and worldwide, tackling the global warming problem. Meanwhile, in today world, there is a wide variety of research and development ongoing on “renewable energy” beyond solar, such as wind power, biomass power generation and fuel cells. In addition, at the time of the establishment of the predecessor Division, the power supply was simply based on nuclear power to provide a stable base power and thermal power generation to supplement the fluctuation of demand. However, nowadays many types of renewable energy are connected to the grid and the operation of the system infrastructures for stable power supply has become highly difficult and critical. We have therefore reorganized the Division, which previously focused only on solar, to include the entire “renewable energy”, and defined the purpose of the new Division as following:

(ⅳ) Collaborations between our research division and external research institutes.

Members of the Division

The Division consists of 15 members listed as follows, who all have different fields of expertise in physics, chemistry, electrical power, electronics, materials and management. We are gathered together to deepen the discussion on the development of renewable energy utilization technology and aim for major developments through synergistic effects.

As a research and development hub for renewable energy technology, we will realize novel renewable energy materials and power generation systems through vertical integration of technologies, as well as educate the next generation of researchers and disseminate the technology to society. Specifically, the following activities will be carried out:

(ⅲ) Development of ultra-low-cost solar and fuel cell materials and manufacturing methods, and examination of their common basic technology.

(ⅱ) Integration of smoothing technology development for wind×solar power generation and power storage technology such as batteries and flywheels. 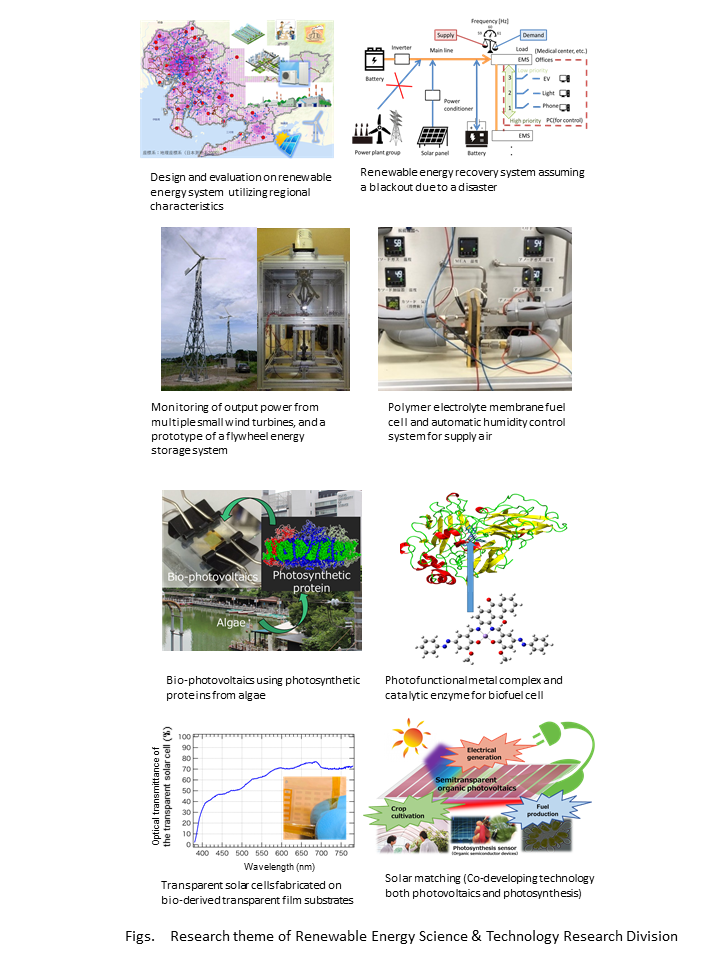 Through active interaction among the Division members from different backgrounds, we will promote both internal and external joint research to create novel concepts for renewable energy technology.

In response to the trend of times, this division is created by reorganizing the Photovoltaic Sci & Tech Division established in 2010. We are composed of members from different fields of expertise in various renewable energy devices and systems. We will develop unique renewable energy and integrated systems/infrastructures such as solar-wind-biomass power generation.