Background and purpose of the division

This division was established to clarify how the brain activities of multiple individuals interact with each other in the process of social group formation, and the aim of the division is to supporting group formation and creating a society in which diverse individuals can live together in harmony. We would like to create a new academic research field, “Parallel Brain,” which will clarify the process of social group formation and interaction by focusing on the brains of multiple individuals, breaking away from conventional brain research and technology development that has focused on single individuals. By using brain research methods for synchronously (parallel) measuring the brain activity of multiple individuals (mice and humans) who form a group, and by proposing technologies for sensing and reproducing biological information based on brain research findings from our unique interdisciplinary field, we will be able to support social group formation and symbiosis in the online space. Furthermore, by using the same sensing technology in both mouse and human experiments, we aim to build a theoretical background for describing the interaction between multiple brains common to social animals using mathematical models. 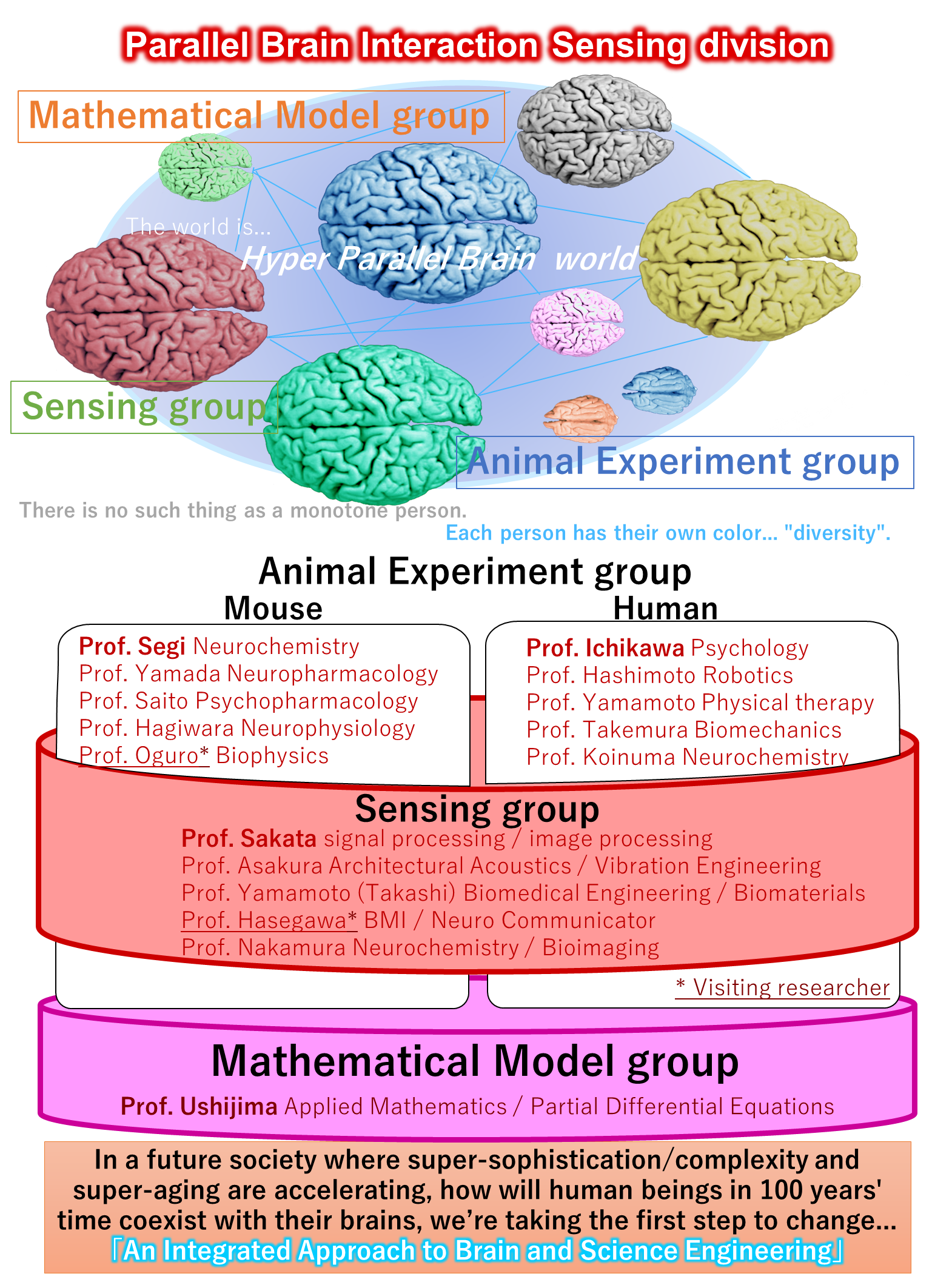 There are several research themes in progress, some of which are introduced below.

The physiological organization of the neural network in brains is a prerequisite for higher brain functions ranging from memory and decision to behavior and empathy. On the other hand, the central nerve axons of adult mammals have lost the ability to regenerate from injury, as shown by the pathology of spinal cord injuries caused by traffic accidents or falls from heights. Basic research to reinforce this loss of regenerative capacity and reconstruct the neural circuit has progressed rapidly in the last decade, and axon regeneration has been partially successful in mouse optic nerve. Nakamura and Koinuma have newly identified the TC10 G protein as a molecule that promotes axonal regeneration in the mammalian central nervous system. The regeneration factor TC10 was known to have the molecular function of membrane addition to the plasma membrane. In addition, TC10 has the ability of stabilizing microtubules at distal axons. This research has been done in collaboration with department Prof. Takemura and Segi. 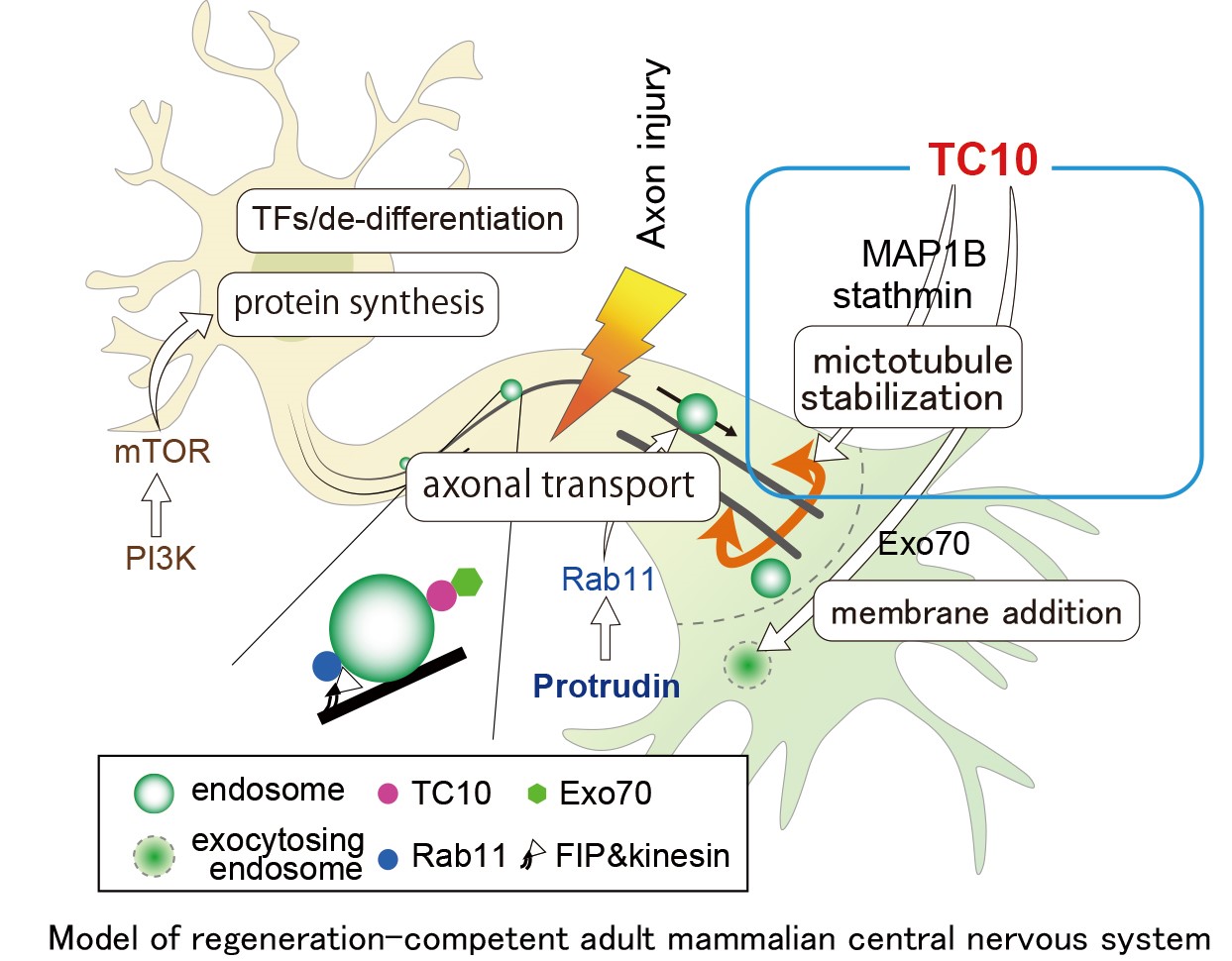 Autism spectrum disorder (ASD) encompasses a set of neurodevelopmental phenotypes that clinically present with impairments in social interaction and restricted, repetitive behaviors. Current studies suggest that copy number variations at chromosome location 3p26 – in particular a deletion spanning the CHL1, CNTN6 and CNTN4 genes – are a highly-penetrant risk factor for ASD. However, the molecular mechanisms by which genes at this locus mediate neuronal cognitive function and development still remain unknown. To understand potential neuronal mechanisms linking 3p26 deletions to ASD, we have generated the animal model to investigate behavioral and molecular phenotypes. We will use these animals to study how 3p26 loss-of-function impacts upon normal brain development and behaviors. This research has been done in collaboration with Drs. Segi-Nishida, Oguro-Ando, Saito, and Nakamura.

We will hold a number of public seminars and workshops to find a common language for researchers in multiple dimensions, educating the young investigator and students, increasing the integration of researchers.

This division brings together researchers from both inside and outside the university in the field of the brain and neural information and systems to create an innovative academic field, “Parallel Brain,” originating from the University of Science. We aim to reveal how brain activity of multiple individuals interacts with each other.