Carbon nanotubes and graphene are low dimensional materials (with linear and flat shapes, respectively) composed of networks of 6-members rings (honeycomb structure). Owing to strong covalent bonds of carbon atoms, they have excellent mechanical strength and chemical stability enough to sustain the monolayered structure in a free space. Furthermore, they exhibit properties peculiar to the geometrical configuration and low dimensionality, which cannot be expected for three-dimensional crystals. As you can see from the fact that the Nobel Prize in Physics 2010 relates to graphene, nanocarbons such as carbon nanotubes and graphene are extensively studied in basic science. In the future, nanocarbons are expected to play a main role in an industrial revolution as iron and silicon did in the Industrial Revolution and the information technology revolution, respectively.

The Division of Nanocarbon Research covers topics of nanocarbons from fundamental to applied researches by collaboration of experts in theoretical and experimental condensed matter physics, electrical engineering, thermal engineering, and biophysics. We expect synergy effects by enhancing mutual discussion and exchange of ideas in the division. 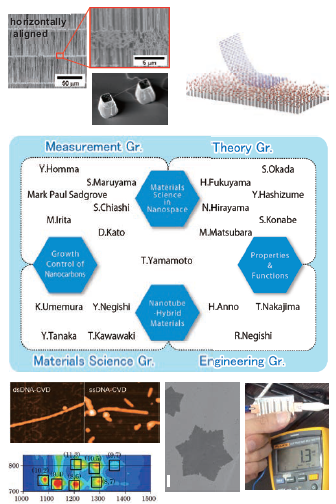 To promote advanced researches on nanocarbons based on tight and highly active collaborations of division members.

Nanocarbon is an active research field with increasing publications. Our research division is unique in that advanced researchers of nanocarbons are getting together and perform researches with wide scopes. In particular, tight collaborations between theorists and experimentalists are our strength. We are aiming at creating new fields and technologies based on our researches.