Division of Colloid and Interface Science

All physical objects have surfaces. A boundary surface (interface) also exists between two mutually contiguous objects. Interface science is a discipline that researches surfaces and interfaces.

The Division of Colloid and Interface Science had been shifted to the Center for Colloid and Interface Science during 2008~2013, because a project application was accepted as the MEXT Program for the Development of Strategic Research Bases. The project theme was “Creation and Application of Nano/Biointerface Technologies,” and the research unit consisted of 5 groups: biointerfaces, biomaterials, nanomaterials, nanospace, and interface theory/analysis. In this project, we approached the interface as the locus of temporospatial expression of function, and our goal was to create temporospatially controllable nano/biointerface technologies.

Now, we restarted the division of colloid and interface science with new members from April 2013. The main research project is the deeper understanding of dynamic surface phenomena of “soft interface” and “hard interface”. Here, “soft interface” is referred to a dynamic ineteface where molecules and atoms are continually going in and out thorugh the interface, whereas “hard interface” means a static interface where no exhange of molecules and atoms take place at the interface. The representative materials of the former are spherical and worm-like micelles, emulsions, vesicles and Gibbes monolayers, while the latter are metal nanoparticles and nanowires, nanoporous materilas made of organic complexes, self-assembled monolayers on solid substrates. “Soft interface” and “hard interface” can also be called “dynamic interface” and “static interface”, respectively, and the both interfaces are classified into three basic groups according to dimesions, namely, zero and three dimesion, one dimension and two dimension. We aggressively pursue the fully understanding of the fundamental phenonema and the fuctions at the both interfaces, and hope to achieve the development of novel functional materilas. 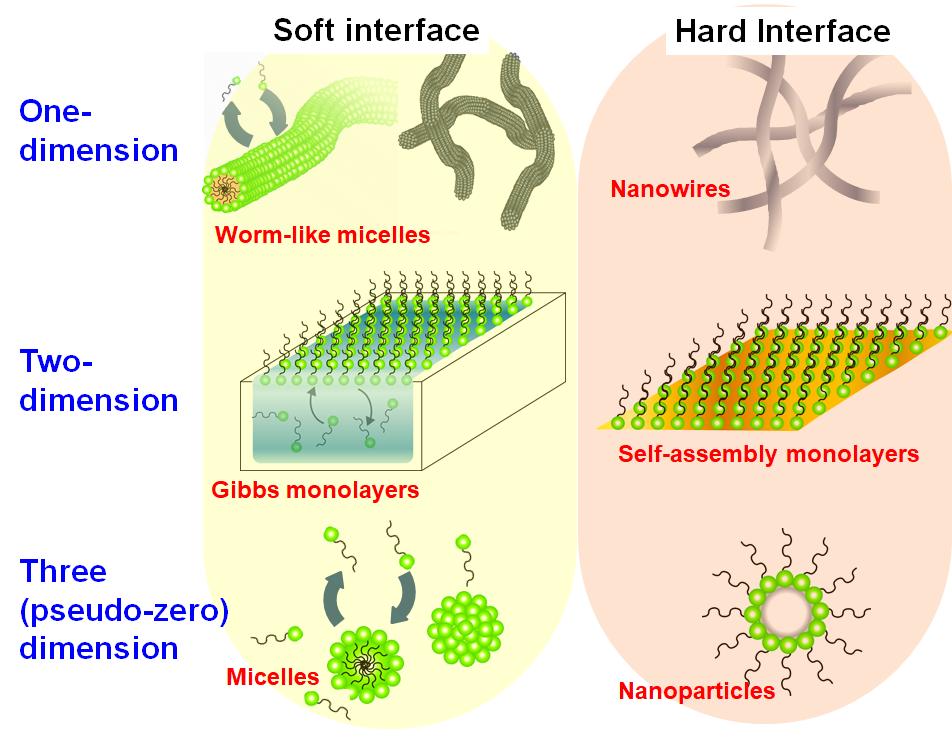 In this project, we are going to investigate intensively the role of water molecules present at interfaces such as solid-iquid, liquid-gas and solid-gas interfaces. It is general known that water molecules at interfaces play a crucail role in performances of various functional materials including biomaterials, however, the detailed functions and structure of water, and interactions beween substrate molecules and water remain unsolved.

We afford a deep understanding of surface phenomena from fundamental aspects and the practical aspects by the assist of exchanges of information and closer collaboration between interdisciplinary researches. In particular, we give intensively attentions to “static and dynamic surface behaviors” and “dimension of target-objects”.

Research objective of Division of Colloid and Interface Science (DCIS) is to understand various phenomena occurring emerged from restricted spaces at interfaces or boundaries and to develop novel functional interfaces, by collaboration of TUS researches who specialize in chemistry, physics, life science, mechanical engineering, and theoretical science.  We sincerely hope that outcomes of our project will contribute to the progress of many research fields and also the improvement of our quality of life (QOL).