In April 1999, the IR FEL Research Center (FEL-TUS) was established at the TUS Noda Campus as a base for enhancement of IR FEL and development of new photoscience using IR FEL, a research project under Grant-in-Aid for Creative Scientific Research. While development research on the Free Electron Laser (FEL) itself is underway in a number of research institutions, FEL-TUS is one of the few facilities that prioritize research on the use of light by harnessing the characteristics of FEL as a mid-infrared light source.

Figs. 1 and 2 show a schematic outline of the FEL device and the structure of the undulator. An electron beam generated by the high-frequency electron gun has its energy spread regulated by the α-magnet, and is forced toward the linear accelerator. The electron beam, now accelerated to a maximum 40 MeV, passes through a deflecting magnet and is led toward an undulator. This is a radiationproducing device in which thin permanent magnetic plates (using SmCo for the poles) are aligned periodically in vertical bipolar alternation, generating a magnetic field that is modulated in the fashion of a sinusoidal wave. When accelerated electrons are passed through the undulator, the electrons oscillate and generate synchrotron radiation in the tangential direction. This synchrotron radiation is accumulated inside a pair of the gold-coated concave mirrors (called optical resonators) set at both outer ends of the undulator, and is amplified by a strong reciprocal effect with the electron beam. FEL light is output through a 1 mmdiameter pinhole in the upstream mirror. In this respect, FEL has no laser medium and its principle of oscillation differs essentially from the original laser (Light Amplification of Stimulated Emission of Radiation). The main body of the FEL is surrounded by a 2 m thick concrete wall to prevent neutrons and γ rays from leaking out. The FEL light emitted from the resonator is first converted to parallel rays, then propagated in free space mode in a vacuum to ensure that it is guided with its properties being retained inside the laboratory. Although small in scale, FELTUS is a facility that includes an accelerator. As such, the advice and guidance of experts are vital to its operation and management. In fiscal 2009, our Center was selected as an Accelerator Science Support Project of the High-Energy Accelerator Research Organization, and currently maintains a stable operational status under a system of full support.

A marked characteristic of FEL is that it involves no limit on oscillation wavelength due to absorption of the medium; in principle, oscillation is possible in any wavelength region. Of course, generating ultraviolet light with FEL requires an electron beam of correspondingly high energy, along with a commensurate increase in facility scale. FEL-TUS is designed specifically for the mid-infrared region (MIR). Its practical oscillation wavelength is 5 ～10 μm, which corresponds to the absorption frequencies for vibrational modes of molecules. Another major characteristic lies in the time structure of oscillation. The repetition frequency of FEL-TUS is 5 Hz, and pulses made every 200 ms are called macropulses. Each macropulse consists of a string of micropulses at 350 ps intervals. The peak power of micropulses is several MW, corresponding to a high photon density of 1026 photons per second.

By drawing on these characteristics of FEL light, we are able to conduct different types of new experiments that would not have been possible with conventional light sources. Our Research Center is promoting the following, in particular, as priority tasks:

(1)Tracing the physical and chemical processes such as photodissociation and isomerization induced of molecules by multiple photon process.

When molecules are irradiated with light, they normally absorb single photons. But cases such as FEL, in which the output power is high, they induce the phenomenon of multi-photon absorption, in which several photons are absorbed at a time. If the sum total of all the photon energy absorbed exceeds the energy of chemical bonds, these bonds may be broken (dissociated). FEL is capable of exciting specific vibrational modes in molecules, and is therefore expected to be able to induce selective dissociation of bonds and reactive processes. Understanding the details of this in macroscopic terms is the target of (1) above. Protein aggregates such as the amyloid fibrils are in many instances associated with serious diseases including amyloidosis. Those aggregates contain many β-sheet structures which are formed by intermolecular hydrogen bonds of peptide backbones. Although the fibrilstructure is so robust in a physiological solution, FEL tuned to the amide I band (6.0μm) can dissociate the amyloid fibrils which are formed by lysozyme, insulin, and calcitonin peptide fragment into each native monomeric form. The effect of FEL on the refolding of amyloid fibrils can be analyzed by using electron microscopy, MALDITOFMS, and FTIR following the FEL irradiation. As a mechanism, it can be suggested that non-covalent bonds between β-sheet structures can be affected by the FEL irradiation tuned to the amide band. As for (2), vibrationally excited molecules are known to cause specific reactions, and the aim is to elucidate microscopically, i.e. via molecular science, what properties of molecules cause this specificity. “Pumpand-probe” is a technique of first generating vibrationally excited molecules via FEL (pumping), then tracing the behavior of these molecules using a separate laser light (probing). By introducing a second laser light, not only are we able to identify reaction products, but also to completely define the direction and speed of their movement as well as their quantum state distribution, etc.

This research center has been financially supported by the Ministry of Education, Culture, Sports, Science and Technology (MEXT) from 2007, which promoted active use of IR FEL for basic and applied research by external users. At present, ～10 research groups including companies and national institutions are carrying out their original experiments. Because FEL is simply a light source in the mid-infrared region, it is absolutely necessary to combine FEL radiation with suitable detection techniques in order to perform highly sophisticated spectroscopic measurements. We hope that researchers with a variety of scientific background and unique experimental skills make use of FEL radiation and that our center develops as a research base for a variety of fundamental research fields. 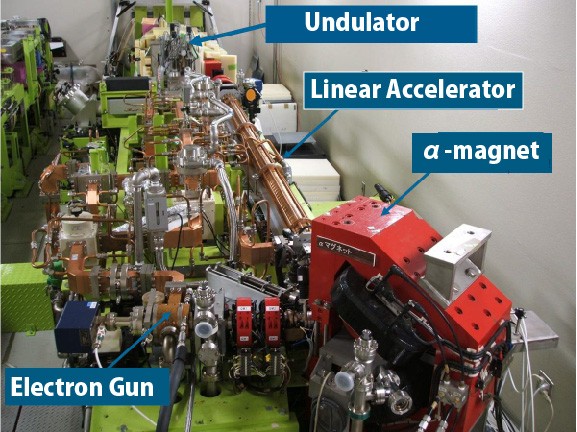 FEL-TUS occupies an extremely specific position in global terms as a variable frequency pulsed light source in the mid-infrared region. We are currently promoting basic research in molecular science and spectroscopy as a priority research task, with a view to making maximum use of its characteristics. We will continue our efforts
for the further development of our Center as a research base for molecular science.